The third case of Sickle Cell was described in 1915 by Cook and Meyer in a 21-year-old woman.  Interestingly, blood samples from both the patient and her father, who displayed no [...]

The third case of Sickle Cell was described in 1915 by Cook and Meyer in a 21-year-old woman.  Interestingly, blood samples from both the patient and her father, who displayed no symptoms, showed the sickling deformity of the red cells and three of her siblings had died from severe anaemia.  These observations made by Dr. Emmel suggested a genetic basis for the disease but also led to a period of confusion with the genetics of the disease.

Approximately 5% of the population in the world carry mutations that results in the production of abnormal haemoglobin and the resulting diseases are termed haemoglobinopathies. Normal globin genes produce three types of haemoglobins:
Haemoglobin A (the normal form that exists after birth), Haemoglobin A2 (a minor component comprising less than 3%) and Haemoglobin F (predominant during fetal development).  Several clinically relevant abnormal forms are highlighted in the table below. 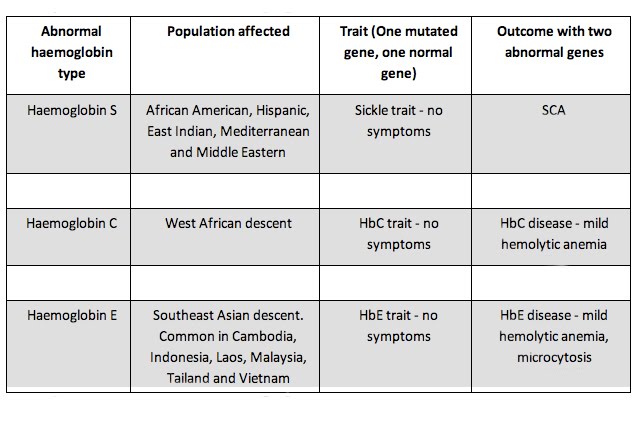 (Source: diabetes.niddk.nih.gov)
There are generally more sickle-cell trait carriers than individuals who suffer from Sickle Cell Anaemia, but the dominance of the trait in certain areas of the world has led to about 300,000 infants born annually with major haemoglobin disorders. 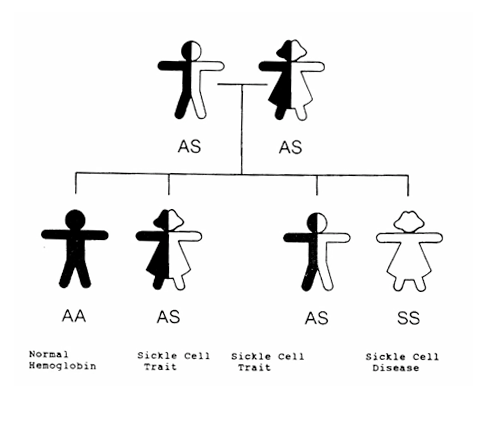 Image from: http://cornellbiochem.wikispaces.com/Sickle+Cell+Anemia
Following this initial observation, several decades of research was required to establish the relationship between the sickle trait and the disease due to the discrepancy between the number of predicted cases using Mendalian genetics and the actual number of patients with Sickle Cell Anaemia. This discrepancy was later explained by the low life expectancy of children with sickle cell anemia as the majority of the sickle cell children were dying before those sampled in the surveys.  It is now well established that the sickling trait is hereditary and is passed on in a Mendalian fashion from parents to children.
Share to
Latest Posts

Sickle Cell Association of Ontario @SickleCellON
1 year ago
A WIN for all involved! CONGRATULATIONS and all the best on this new appointment @MVerhovsek twitter.com/STJOESHAMILTON…

Sickle Cell Association of Ontario @SickleCellON
1 year ago
Happy Holidays & a heartfelt thank you to everyone who has supported the SCAO throughout what has been a remarkable… twitter.com/i/web/status/1…
ARCHIVES